He has since traded in his skates for a whistle and white board, and after a season serving as an assistant coach for the NAHL’s Minot Minotauros, will be joining the USPHL’s Metro Jets organization for the upcoming 2022-23 season.

“I had a couple of conversations with ‘Q’ (Jets coach-GM Justin Quenneville) over the last little bit here and he expressed how there was an open position with the staff,” Howie said. “I just felt it was an awesome opportunity to come back home and join an organization that has an incredible reputation both on and off the ice.

“I want to thank Minot for the time I got to spend there as both a player and coach. I learned a lot from the entire organization and the city with always a hold a special place in my heart.”

Howie, a 27-year-old native of Grand Blanc, Mich., skated on the back end for the Flint Jr. Generals during his junior career, later advancing to Minot before playing four years for Marian University (NCAA) in Fond Du Lac, Wisc. After college, Howie spent time in the pro ranks, winning a Federal Prospects Hockey League title with the Columbus River Dragons in 2020.

Last season, Howie ventured back to Minot and got his feet wet behind the bench.

In his talks with Quenneville, it became obvious that Howie would make a fantastic addition to the Jets coaching staff.

“Obviously, we are excited to bring Jake in,” Quenneville said. “He is someone I have known a long time dating back to coaching days in the NAHL. He will fit in great here with his background and ability. He is eager to bring his experiences here and help develop our players. Even though we have many relationships at the NAHL/NCDC and NCAA levels, Jake coaching in the NAHL last season will bring more opportunities for our guys since he has a good pulse on everything. Our players will love working with an energetic and knowledgeable hockey mind. He will be involved all aspects with helping our players’ development and exposure.

“Our program takes pride in providing the best platform for players to get want they need and adding Jake will only elevate that more. He was someone I wanted years ago as a player, and now he is someone I want here as a coach. I am glad we were able to make it work, and our program will be better for it.”

Howie noted how staying in touch over the years with Quenneville was crucial in moving up the coaching ranks.

“I’ve known Q for nearly nine years, going back to when he was coaching Corpus Christi in the NAHL and I was playing for Flint and he offered me a tender contract,” said Howie. “From there, Q was huge in my development, both on and off the ice, in the coming months leading into tryouts that summer. Q and I have stayed in touch over the years, and I couldn’t be more excited to join a staff with him and the other coaches and have the ability to learn and develop as a coach every day from a group with such great experience and insight.”

As the benchmark for player development in the USPHL and across the junior hockey world, the Jets stress that aspect of the game over wins and losses, something Howie is on board with going forward.

“Obviously, we want to have good players on the ice, but we want to have a group that is better people off the ice,” Howie said. “I think with both my playing experience and a year of coaching experience in the NAHL that I can help not only develop our players’ abilities on the ice but help them continue to develop as great people off the ice as well.”

In playing and coaching at a high level, Howie said he has gained knowledge surrounding the game that he can now bring to Mount Clemens.

“My playing career was one where I was never the most skilled or best player on the ice, so I had to bring a hardworking determination to my game to achieve what I wanted,” said Howie. “After a year of coaching, I quickly learned that the most skilled team doesn’t win every night. In most cases, the team that will come away with a victory on a given night is the team that works the hardest and is the most detailed in their game. My hope is to help Metro be the hardest working and most detailed team on the ice every night, which should bring us quite a bit of success.

“The Jets have a storied history in junior hockey, and I think everyone would say we want to win a national championship this next season. Truly what I want and expect from this team is for everyone to come and bring their very best every day and grow both on and off the ice. I’m extremely excited to come back to coach to an area that I will always consider home and that gave me so much as a player with all my youth hockey being played in the Detroit area.”

Howie, who is relocating to the area, has family spread out all over the United States. His father Bruce lives in Tallahassee, Fla., mom Nancy in Midland, Mich., sister Rebecca in Arlington, Va., and a sister Katy in Memphis, Tenn. He also has extended family in Metro Detroit. 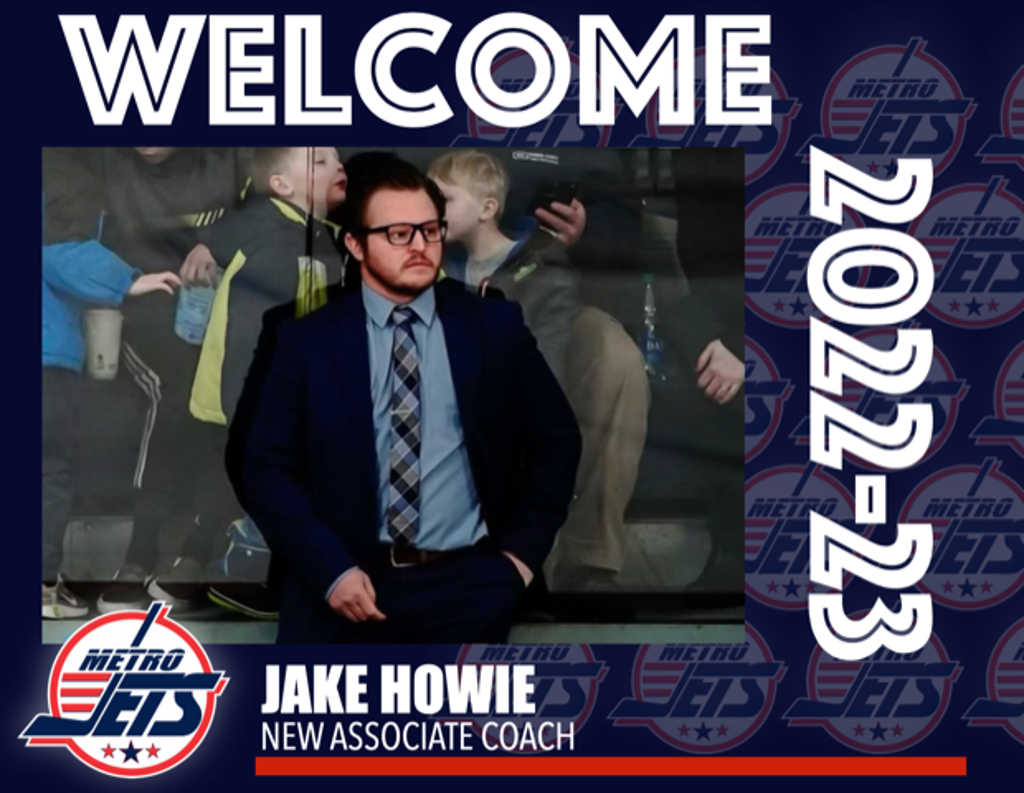