FRASER, Mich. – The Metro Jets have had a history of finding impact import players in recent years.

Mathias Tellstrom (Sweden) made such an impact as a forward from 2015-17 that those seasons earned him a pro contract, Louis Boudon (France) was the league MVP in 2016-17 and just wrapped up his freshman season at NCAA Division I Lake Superior State, Fredrik Meurling (Sweden) was a star goalie in 2018-19 that took the Jets to the national championship game and this past season, Jesper Svadang (Sweden) was a steady force on the Jets’ blue line putting up 17 goals.

Next season, the Jets will have goaltender Louis-Pierre Fortier on the roster after the Montreal, Quebec, Canada native recently signed a USPHL contract to play for Metro during the 2020-21 season.

“My goal is to get to NCAA level, and I was searching for the best hockey organization that would allow me to reach an optimal athlete development,” said Fortier, a 2001 birth year. “I contacted (Jets coach-GM) Justin Quenneville and we exchanged a lot of messages. Coach Q speaks French and that did help me a lot in the steps leading to signing with the Metro Jets.”

Last season, Fortier played Junior AAA hockey back home and can’t wait to make the jump to the USPHL brand of hockey.

“It is natural for me to integrate a new group or team, and I am a person who listens to the coach’s directives so I can fit in the team easily and as fast as possible,” Fortier said. “Will it be an adjustment coming to the States? I don’t think so. My belief is that hockey stays the same wherever you are in the world. I had a great experience with junior hockey in Quebec last season.

“The Jets’ philosophy is to take you to the next level. The coaching staff has many contacts with the NCAA level and Tier II, so that is a great advantage and opportunity for any player that desires to play higher levels of the game. The facilities (Fraser Hockeyland) are top notch, and the coaching staff is highly talented.”

Quenneville has seen video of Fortier from 2019-20 and is anxious to see him in person come September.

“We have been in contact with LP from the start of this quarantine and really got a sense of what kind of person he is,” said Quenneville. “He is motivated to come here and take advantage of the platform. Fortunately, I am familiar with Quebec junior hockey and still have a lot of contacts back home. Not only is the Junior AAA league in Quebec highly skilled, but does a great job preparing players for opportunities in every direction. His experience at that level will help his transition here and we are excited to work with him.

“He’s a gifted goalie that competes for every inch. I believe he will garner lots of attention here and with our pipeline, we will do what we can to help him reach his goals."

Fortier describes his game between the pipes as competitive and skilled.

“I build on the power and speed of my legs,” Fortier said. “I am comfortable in my net and that allows me to make key saves. As well, I must say that my agility in the net helps me a lot in covering every angle. I see everything: the game and the players, but most importantly, the puck.

“I will give the best I have and the best I am at each practice and at each game so the team will get all the opportunities needed to win. On a personal note, I hope to improve my consistency next season.”

Looking ahead to 2020-21 and even beyond, Fortier has every ambition to advance to the college game.

“I just want to help the Jets to win as many games as possible while having fun doing it,” said Fortier. “For the long term, I hope to play Tier II the following year and to have NCAA offers. On the school side, for sure I want to get a university degree and want to continue my studying seriously. 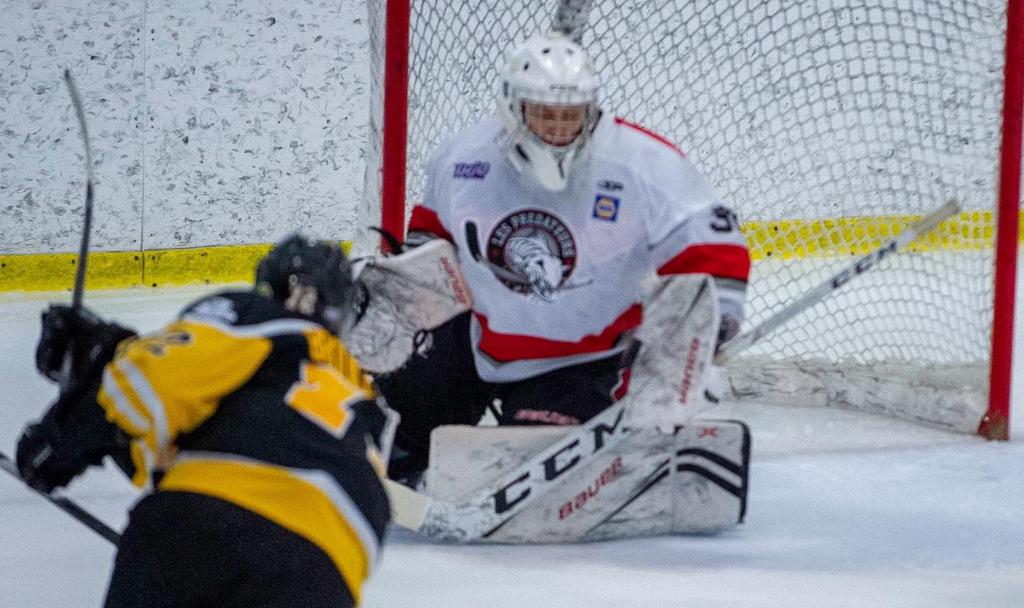