FRASER, Mich. – The college and NCAA commitments keep coming for the Metro Jets.

Finlandia is located in Hancock, Mich., and the Lions play in the NCHA conference.

“Thanks to the Metro organization and Coach Q (Jets coach-GM Justin Quenneville) for the constant collegiate exposure,” said Conover, a forward who posted 31 points in 37 games for the Jets this past season. “I had been in contact with (Finlandia coaches) Joe Burcar and Micah Stipech since the first half of the season. Something that really stuck out to me in the Finlandia organization was their coaches and their honesty. The team plays a similar puck possession style to Metro, which I feel suits my game best.

“Along with a young core group that I will be able to build and work alongside, all of these assets really attracted me, and it just felt like a good fit from the start. With Finlandia being a younger team with a similar play style to the Jets, I saw it as a great opportunity to step in right away and be able to make an impact. My plan is to do this while pursuing a business degree.”

Conover, a 20-year-old from Fenton, Mich., played junior hockey in Canada in 2018-19 after graduating from Flint Powers Catholic High School in 2018.

Quenneville said getting Conover into the Jets’ lineup was something the team needed early on and now, his efforts have resulted in an NCAA commitment.

“Cam brought his size and versatility to our program,” Quenneville said. “He fit in immediately and garnered a lot of NCAA attention during the season. What impressed us the most was how much he took advantage of our program. He came in everyday wanting to get better and improve his habits all over the ice. I think Finlandia is a great fit for him and we wish him the best of luck."

“We had several discussions with Cam this past summer about how we could help him this year,” added Jets associate head coach Jamie Lovell. “He was a character player who played hard on both sides of the puck. His size and abilities will help him step right in at the NCAA level next year and we look forward to pushing him this offseason to continue to get stronger.”

Joining the Jets was an opportunity that Conover said happened rather innocently last summer.

“I wound up in the Jets organization after interestingly playing alongside Coach Jamie in the Eastside Elite Hockey League last summer (run by former Jets defenseman Steven Oleksy),” said Conover. “We communicated throughout the summer and I got in contact with Coach Q. It’s an organization I wish I would’ve given a better look to a year earlier. I have nothing but good things to say about the program and would recommend to all players wishing to develop their game and have a chance to continue their career into college.”

And in reflecting on the season, Conover called it “a great development year.”

“I really got to know myself better as a player and by utilizing the practices, I believe I improved upon my habits and sharpened my game up as a player,” Conover said. “Along with my individual game, there is no other group of guys I would’ve rather played with. We had a tight group that was able to accomplish a lot.”

In committing to Finlandia, Conover said the decision was not only his, but one that goes across many levels.

“My family has been my support system throughout my whole hockey journey,” Conover said. “They have sacrificed so much and helped me strive to be my best all the time. Along with the assistance from them, I’d like to thank all of my coaches and teammates who have made an impact on me along the way. I am forever grateful for all who have helped in their own way.”

Now experiencing an atypical offseason, Conover is gearing up for the jump to Finlandia in the fall.

“This quarantine has me itching to get on the ice,” he said. “I’ve been doing as much as I can do by working out, playing roller hockey, working and enjoying time with family. I also want to leave some time to do things I enjoy, like fishing and golfing.” 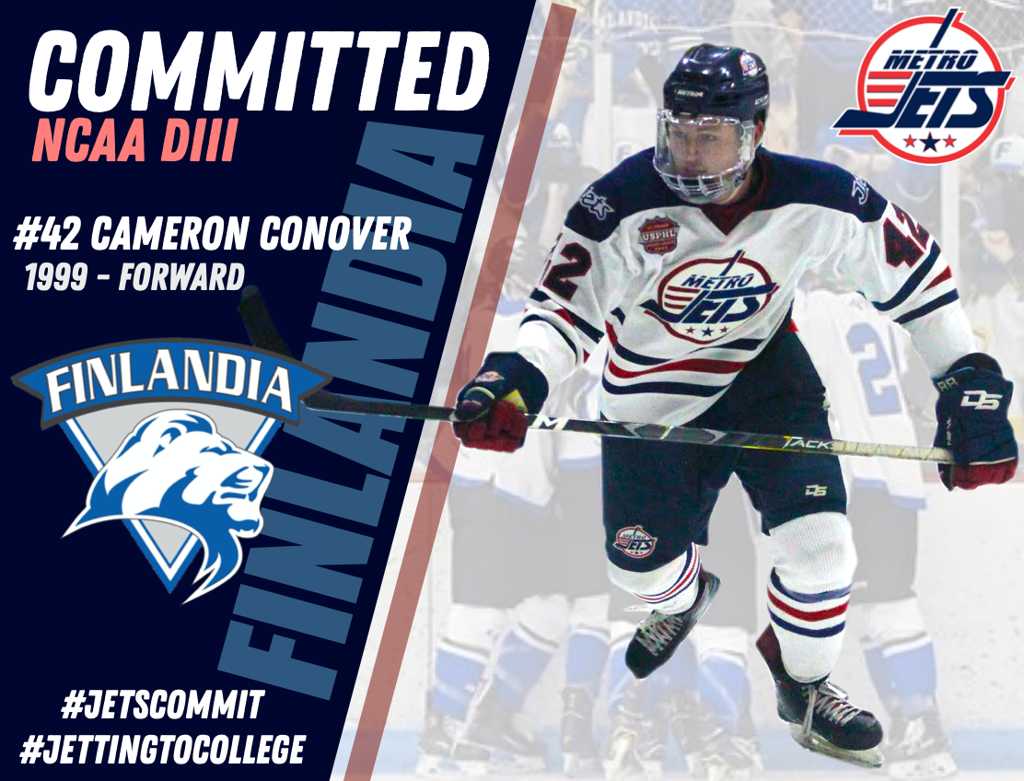