FRASER, Mich. – After a couple games and practices with the Metro Jets in January, DeVon Fields quickly found his role on the blue line and found his passion again for hockey.

Today, the 1999 birth year from Detroit announced his commitment to attend and play college hockey next season at Adrian College, one of many Jets players from the 2019-20 season to commit to the next level.

Not too shabby for a player that had basically given up on the game last fall.

“Back in October, I was in a bad spot mentally,” Fields said. “I was dealing with a lot of injuries coming into the season (with the NAHL’s Austin Bruins) and one more concussion ultimately made me decide to hang up the skates and come home. After I did, I proceeded to have foot surgery and sit out a couple more months.

“I was lost for a while after that.”

A quick phone call changed everything.

“In my heart, I knew I wanted to get back to it and I reached out to my good buddy (and Jets forward) Nolan Turi to help me get in contact with ‘Q’ (Jets coach-GM Justin Quenneville),” said Fields. “I sure do wish I was with the Jets for a longer period. Everyone was welcoming, especially the boys, and they made it feel great playing there. They took me in with open arms and I’ll love that group forever.”

In nine games during the USPHL regular season, Fields tallied four goals and three assists for seven points, and then added two more assists in three playoff games before the coronavirus crisis wiped out the USPHL National Tournament.

Quenneville had been aware of Fields’ situation and kept tabs on him throughout the season. Once he signed with the Jets, it was full steam ahead.

“I was familiar with DeVon and his situation, and when we originally spoke, the goal was to give him an environment to play in where he would finish out his hockey career on his terms,” said Quenneville. “I knew that we could help generate a lot of interest from schools, and I am glad he found that passion to continue playing. He had a lot of college offers, but in the end, he felt that Adrian was the best fit for him and his goals after school.

“He is an elite player and young man. Everyone was impressed with his composure and strength on the ice. He had an immediate impact here when he arrived, and I can only imagine what he will do at the college level with a full offseason of training and no injuries. We wish him the best of luck and look forward to seeing him find success, on and off the ice.”

Prior to Austin, Fields developed his game with the NAHL’s Topeka Roadrunners. Overall, the 6-foot-2, 190-pounder skated in 136 Tier II games with 12 goals among 40 points.

He said his short stint in Fraser reignited his love for hockey.

“During my time with Metro, I approached Coach Q for guidance with schools, and one of his suggestions was Adrian College,” said Fields. “After looking into it, I felt it was the best decision to make. I hope to bring my aggressive, hard-nosed hockey to Adrian and be an accountable D-man for the years I’m there.”

In the classroom, Fields is going to jump right into the Criminal Justice program with an eye on becoming an FBI agent down the road.

Truth be told, serving in the public safety sector has always been a dream for Fields.

“My father (also DeVon Fields) was a firefighter injured in the line of duty and I wanted to follow in his footsteps after my hockey career, but he didn’t want me to become a firefighter due to his injury,” explained Fields. “I’ve always had a spot in my heart for being a police officer. I love the chasing, I love protecting people, and I love being called on for saving lives.”

In choosing to head to Adrian, where Fields will reunite with this season’s Jets captain Brodie Thornton, he said it wasn’t all his doing that got him the chance to play college hockey.

“I have to thank all my coaches from the years before this one – Dominic Nieto (Farmington Hills Fire), Tyler Best (Victory Honda), Rob Krohl (Little Caesars), Steve Howard (Austin) and especially Coach Q,” Fields said. “Without their commitment toward every player they’ve had, I wouldn’t be the hockey player I am today. I thank my entire family and especially my pop. It’s been him and I for as long as I can remember and he’s my hero. He pushes me in every aspect of life, and I can’t appreciate him enough.”

Moving forward – or as forward as society can with all the coronavirus precautions in place – Fields says he’ll continue to work out at home and get his body to 110 percent.

“This summer, I plan to work out every day and play in the Eastside Elite Hockey League (run by former Jets defenseman Steven Oleksy) in Mt. Clemens and keep excelling in my athletics,” Fields said. 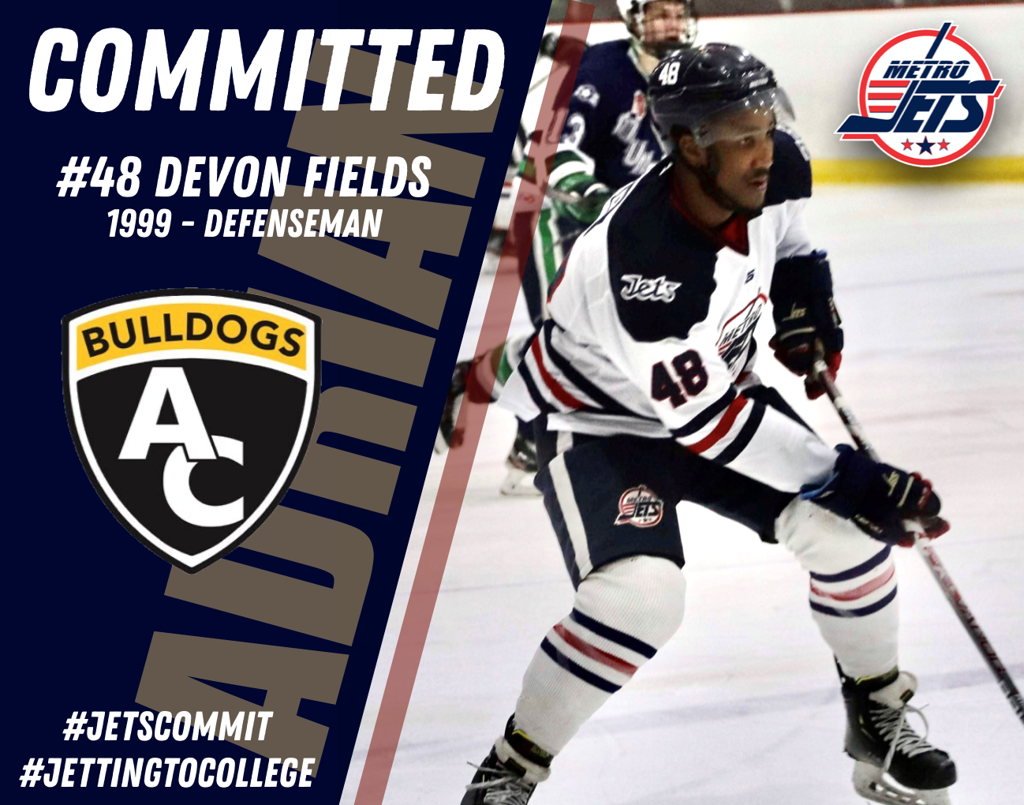