FRASER, Mich. – The past two seasons, Anthony Cinato has had a taste of playing in the NCDC (National Collegiate Development Conference), the Tier II portion of the United States Premier Hockey League.

As an organization, the Jets had multiple NCDC and NAHL callups during the 2019-20 season.

Next season, the three-year Metro Jets forward and franchise all-time leading scorer has the chance to play in the NCDC on a full-time basis after recently signing a tender agreement with the Maine-based Twin City Thunder.

The 2000-born Cinato was called up to the Thunder last November and also played for the NCDC’s Boston Jr. Bruins in 2018-19.

“It was a great experience in Twin City last season,” said Cinato, a Warren, Mich., native. “The community out there is really involved, which is nice. I expect competition night in and night out.

“Nothing is ever guaranteed (by signing the tender), but that’s how it should be. I always try to bet on myself. I want to get stronger and better over the summer with Coach Jamie (Lovell) at the MAT and get myself ready to go for camp in August.”

In 2019-20, Cinato posted a team-best 83 points on 28 goals and 55 assists in 44 games while also serving as one of the Jets’ alternate captains. He took over the all-time team lead in points with a penalty shot goal on Feb. 22 at home against the Columbus Mavericks.

Cinato said he knew at the start of the season that the mark was within reach.

“It was just a goal in the back of my head,” Cinato said. “I knew I was close but still not sure if I was capable of catching it. Our team was pretty special this year I had some really good linemates. Going into that last game, I knew we locked up first place (in the Great Lakes Division), so I know some of the boys were feeding me some extra chances.”

Jets coach-GM Justin Quenneville said Cinato came in raw as a 17-year-old and leaves as a well-polished veteran.

“’AC’ has improved his game consistently here and is deserving of all the offers and attention,” Quenneville said. “It’s a good problem to have, but one he took his time with and I am proud of how he handled it. He’s had multiple callups and felt that Twin City was the best option for him next season. They run a top-notch program and will be getting a top-notch player. I have known (Twin City coach) Dan Hodge for a long time, and he takes pride in his program. We know AC will continue to get more college opportunities and wish him the best of luck.

“This advancement is what this entire process is about, and AC will now bring his versatility and skill to the NCDC in the fall."

Playing for the Jets has done wonders for Cinato’s overall development.

“The Jets are a first-class organization and I can’t thank them enough for the person and hockey player I am today,” said Cinato. “I thank our owner Pete Cammick for always supporting our team and Coach Q and Coach Jamie for giving me a chance to come play at Metro and making me a better person off the ice as well as on the ice.”

Now stuck at home heeding the state’s “stay home, stay safe” directive to curb the COVID-19 spread, Cinato said he is itching to get back on the ice.

“After the cancellation of USPHL Nationals, I just came home and has to dwell over it for a little bit,” said Cinato. “I’m just trying to eat right, stay healthy, and keep the same routine for the most part.” 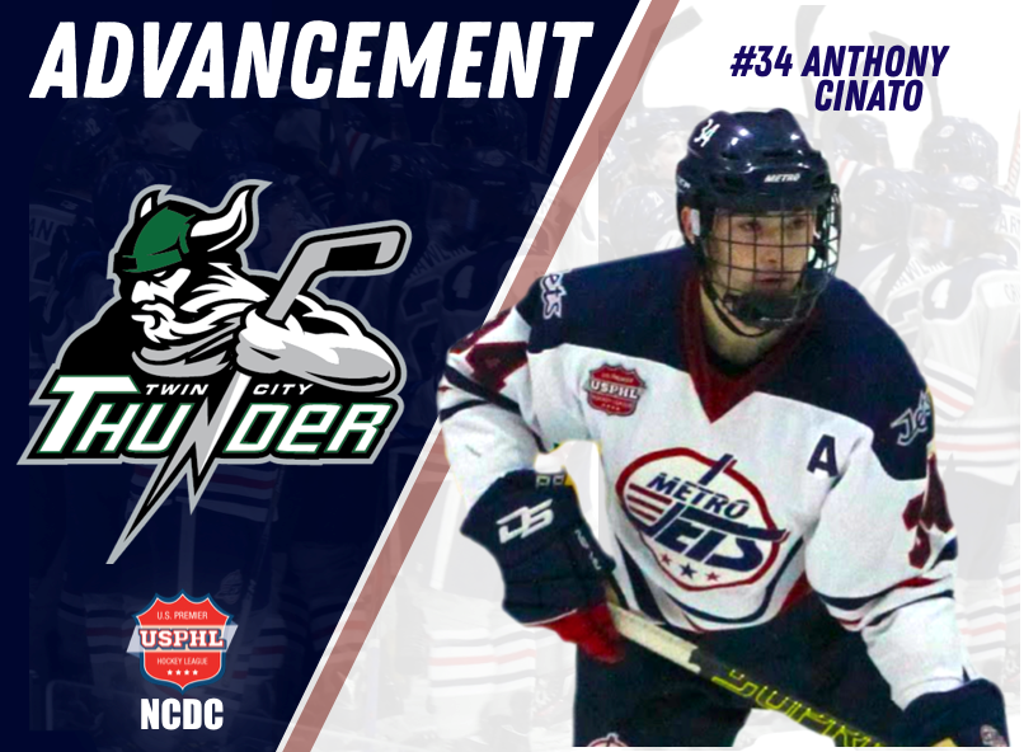