MJDP confident ahead of opening-round USPHL playoff series with Blackbirds

FRASER, Mich. – The USPHL postseason has arrived for the MJDP.

After finishing in third place during the regular season in the USPHL Midwest East Division, the MJDP will host the sixth-place Midwest Blackbirds this weekend at Fraser Hockeyland in a best-of-three division series.

The winner will then move on to play either the Chicago Cougars or Decatur Blaze next weekend on the road.

Game times are Friday at 3 p.m. and Sunday at 11:15 a.m. If a third game is needed, that will be played Monday in Fraser with the time still to be determined.

Metro Jets associate head coach Jamie Lovell says the team will be amped up for the Blackbirds.

“I think we take the same approach as we did last weekend to end the regular season,” said Lovell. “We took a tough loss to Fort Wayne but learned how to forget about it, hit the reset button, and focus on the next game in Lansing because ultimately, the loss to Fort Wayne didn’t matter if we won in Lansing as far as securing third place in the division.

“That’s a playoff series mentality. Whether you lose big, or a close one, it doesn’t matter. Move on and worry about the next game. Same goes if you win the game. Move on and focus on the next game to close out the series.”

Jets veteran forward Brayden Tayles skated in the USPHL postseason a year ago and brings experience to the MJDP team this year.

“At this point in the season, our mindset is everything,” Tayles said. “We have worked all season with the coaches creating good habits to help us in game situations. Now it’s on us to execute and be focused mentally. As a returner, there is not much we can really say any more. We need to lead by example and show the guys that are new to the playoff environment what needs to be done.

“All the talking is over, we have prepared all season, and now I’m just focused on flipping the switch every game and showing guys through actions what it takes to win playoff games.”

During the regular season, the MJDP and Blackbirds split a two-game series Oct. 18-19 in Dyer, Ind., and then Feb. 7-8, the MJDP pitched two straight shutouts over the Blackbirds, again in Dyer.

“Midwest has been a tough opponent all season for our team,” Lovell said. “I think discipline will play a factor. We want to play hard between the whistles and keep the game 5-on-5 as much as possible because that works to our strengths as a team.

“This is the best time of the year, a new season, and everyone is excited.  Our guys know that nothing changes in how we approach our game, and I fully expect them to be ready.”

Tayles added that with all the players on the same page, positive results should come out of this weekend.

“When it comes to Midwest, I am expecting a hard-working, physical team,” said Tayles. “They are going to skate hard and finish every check. In order to win this series, we just need to buy in every shift. As long as our compete level is there, I know that we will be the better executing team. We need to play our game at a consistent level, and at the same time do the little things that make a big difference.

“We just need to do a job and I’m confident that we will get it done.”

The Jets have a bye this week by virtue of finishing first in the USPHL Great Lakes Division and will host a second-round series next weekend at Fraser Hockeyland against a team to be determined. Game times are 4 p.m. Friday, noon Saturday and then noon Sunday if a deciding third game is needed. 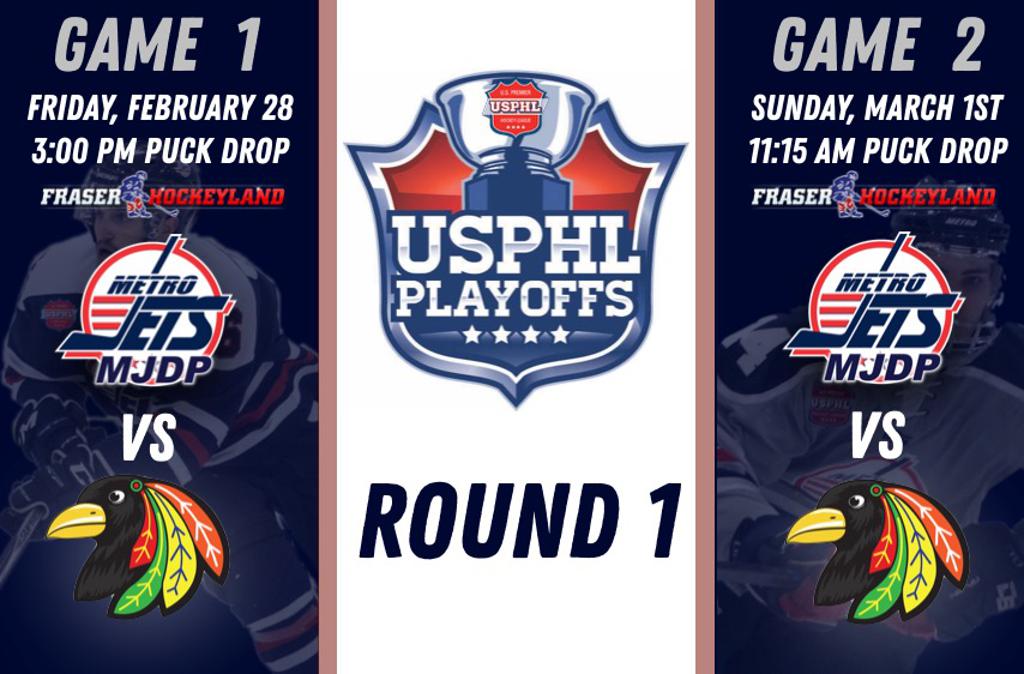