TOLEDO, Ohio – Justin Renzi and Trevor Granzow each scored two goals to lead the Metro Jets to an 8-1 win over the Toledo Cherokee Friday night at the Team Toledo Ice House.

Granzow (pictured) added an assist for a three-point game and Matt Bleim scored once with a pair of assists.

In goal, Will Augustine made 19 saves as the Jets outshot Toledo 58-20.

“I was really impressed with the way we managed the puck in all three zones with the exception of a couple plays,” said Jets associate head coach Jamie Lovell. “The one turnover led to their goal, of course, but ultimately, we played a strong game from start to finish.”

Defenseman Justin Song, just back from the NCDC’s Rochester Monarchs, drew an assist on Lindecker’s goal.

Having this big win against Toledo is huge for the boys tonight,” German said. “Our compete level and confidence going into playoffs will help us reach the success we’re looking for. Having back-to-back games against the same team makes the games more competitive to win. Knowing Toledo, they will come out tomorrow strong and eager to win.”

“We have to move on and prepare again for tomorrow night,” added Lovell. “Just like last weekend, we’re playing the same opponent on back-to-back nights on the road, so it doesn’t get any easier.”

The two teams play again Saturday night at 7 p.m. back at the Team Toledo Ice House.

Also Friday night, the MJDP blanked the Midwest Blackbirds 6-0 at the Midwest Ice and Training Center.

Patrick Hays recorded the hat trick and Ethan Ryan turned aside all 19 shots he faced for his second straight shutout.

The MJDP outshot the Blackbirds 61-19.

“We started out good but then we took a few unnecessary penalties,” said Jets assistant coach Dan Pszenyczny. “The team buckled down, eliminated their scoring opportunities, and came away 0-0 after the first. The second, they came together and started playing hockey, started moving the puck and opening up the game for each other.

“It was good to see Hays finally hit the back of the net a few times today. All in all, everyone on the bench played a great game. Ethan Ryan came up with timely saves when we needed him to.”

Hays said his last hat trick was “about eight years ago in youth hockey.”

“Everything went right tonight,” said Hays. “My teammates were feeding me passes and giving me chances to shoot. I tried to capitalize on every chance I had and ended up with a hat trick.

“This is a great win for the guys coming out here on the road. We talked about starting our playoff mentality early and I think it showed here tonight.”

Parker Wolters and Brayden Tayles each had a goal and an assist and Mitchell Hoon also scored.

Midwest goalie Radek Hunsinger made 55 saves in the Blackbirds net.

Both teams wrap up their weekend series Saturday at 8:15 p.m. Eastern.

“They had a couple guys out tonight, so we’re expecting them to come out as hard, if not harder tomorrow night,” Hays said. “We need to come out tomorrow with the intensity we did tonight in the second period.” 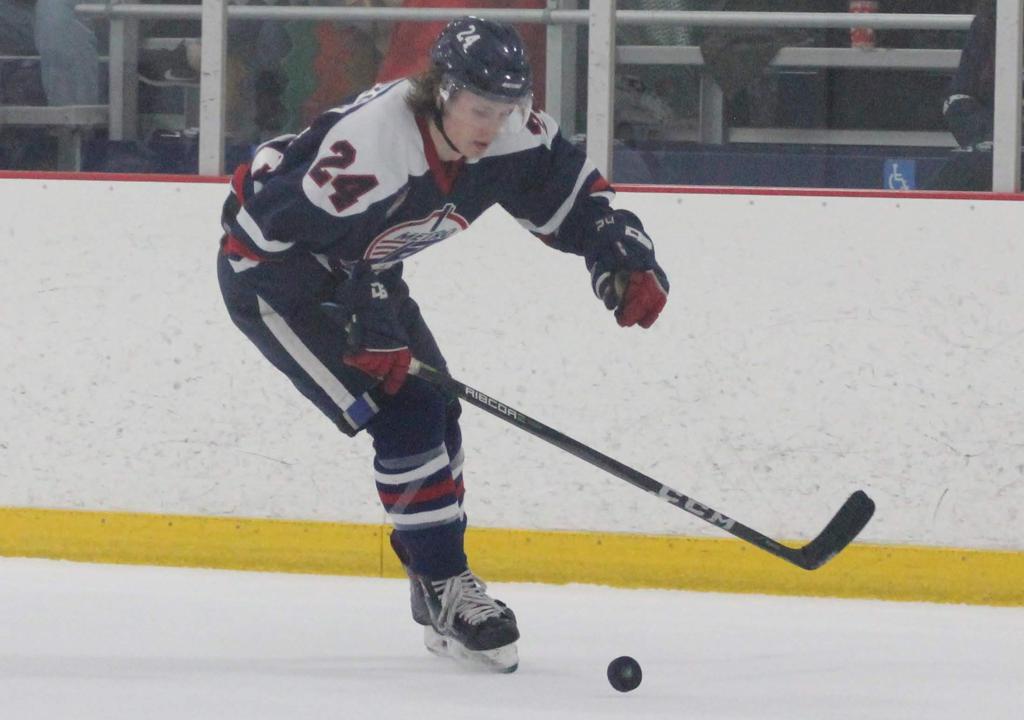