FRASER, Mich. – The Metro Jets have a longstanding tradition of team success, as well as moving players on to not only college programs, but programs where players can excel, both on and off the ice.

This past week, Jets captain Brodie Thornton committed to play for Adrian College, a team that won a national championship in 2018 with several former Jets players on the roster.

“The campus stood out to me when I visited and the school is only two hours away (in Adrian, Mich.),” said Thornton, a Clinton Township, Mich., native now in his third season with the Jets. “It’s a relief to make this commitment and a really good opportunity for the next four years. I hope to fit in really well as a freshman next fall.”

With the Jets, Thornton’s game has developed so much that the coaching staff can use him up front or on the back end and knows it will get similar results.

“We have known Brodie since his youth days,” Jets coach-GM Justin Quenneville said. “He is everything in a player and person coaches want. His family is full of awesome people who have done a lot in our hockey community. To see Brodie develop, grow and succeed to this level has been a blessing these last few years. He’s has developed into one of the best versatile players in the country.

“Brodie had an unprecedented amount of NCAA options, but it the end, he felt Adrian was the best fit for him. A top program is getting a top player. We are proud of him and wish him and his family nothing but the best.”

Thornton was a rookie on the 2017-18 Jets team that captured its fourth national championship and wants to close out his junior career the way it started.

“Growing up playing hockey for the Metro Jets, I have learned to respect and to view things from all perspectives,” said Thornton, who turns 21 on April 6. “I appreciate the opportunities coaches gave me and came to realize the sacrifices they made to enable me to promote my skills on and off the ice. I will have to thank all coaches of the Jets (Quenneville, associate head coach Jamie Lovell and assistants Randy Wilson and Dan Pszenyczny) and our staff from ownership to the game-night and front office people.

“I also want to thank my closest friends and family members for knowing how much passion I have for the game and knowing to support me all the way.”

Getting back into the swing of school will be a challenge for Thornton, who played his youth hockey at Fraser Hockeyland, including two years with the Jr. Jets program, but it’s one he’s ready to face to continue living his dream.

He’s looking to major in Business Marketing at Adrian.

“I will have to reaffirm my dedication academically, but this is a challenge I have prepared for my whole life,” Thornton said. “I am certain of my readiness to tackle it.”

In the 2018 national semifinals against the Granite City Lumberjacks, Thornton’s overtime winner sent the Jets to the national title game, a game that also went to OT before Jhuwon Davis’ goal lifted Metro over the St. Louis Jr. Blues.

“That’s one memory that I will never forget,” said Thornton. “Winning the national championship my first year is an unreal memory but that’s the icing on the cake for all the moments I had that season. Another surreal memory would have to be seeing the Jets grow in numbers these past three seasons.”

This year wearing the ‘C,’ Thornton has compiled 21 goals and 51 points in 38 games.

More than stats, Thornton wants to once again see the Jets playing the final game of the season.

“My team expectations for the rest of the season are coming more together as a team, making playoffs and heading to nationals,” he said. 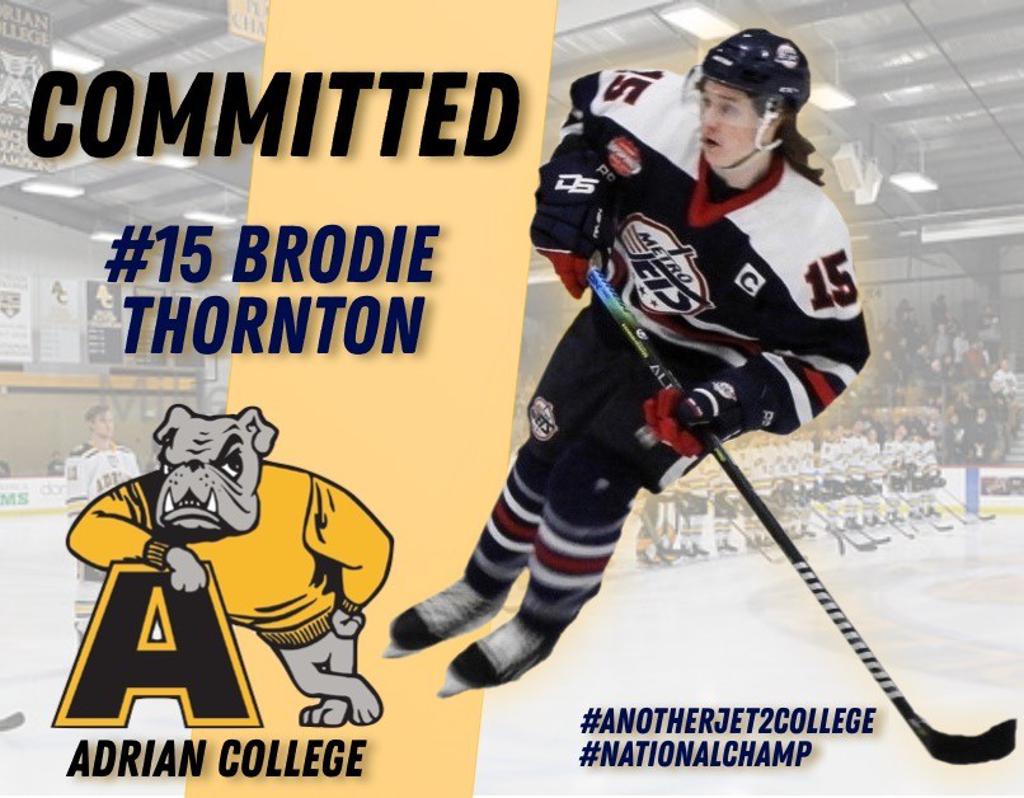