FRASER, Mich. – The Metro Jets and MJDP combined to go 3-0 on the weekend, with two wins coming on the road.

Friday afternoon, the MJDP downed the Motor City Hockey Club 10-0 at Jack Adams Arena in Detroit and then the Jets beat the Lansing Wolves 4-3 that night at Fraser Hockeyland.

“It was nice to see guys get rewarded on the scoresheet for their hard work and pressure,” said Jets associate head coach Jamie Lovell. “We continued our dominance from last weekend’s game into this afternoon and finally put some pucks in the net. Credit to Ethan Ryan (pictured) for making some big saves to preserve his shutout despite going long stretches without seeing a lot of action.

“Great effort from every guy throughout the lineup.”

For the Jets, Conner Graham’s goal at 16:48 of the third period snapped a 4-4 tie and the Jets held on for the win.

“Trying put things into perspective and never be too upset when you come out with the win, which is ultimately the result you want,” said Lovell. “Just not really pleased with the process it took. We still carried the play, for the most part, but took too many penalties, dumb untimely penalties, and let Lansing back into the game. And that kept them in the game.

“When you’re having trouble scoring goals, you can’t give up power-play opportunities and make defensive mistakes the way we did tonight, but we scored some good ‘hockey goals’ and found a way to win in the end. We know we need to be better.”

Graham also had an assist for a two-point game.

In goal, Machus Turner made 22 saves and also stopped a penalty shot attempt by John LaBombard at 19:40 of the second period.

Sunday, the Jets’ offense exploded as Nick Ceccarini’s six-point game (five goals, assist) lifted Metro to a 12-3 win over the Columbus Mavericks at the NTPRD Chiller in Springfield, Ohio.

Will Augustine turned aside 31 shots in goal.

Next weekend, the MJDP is on the road to play the Decatur Blaze Friday night at 6 p.m. Eastern and Saturday night at 8:30 p.m., while the Jets host Lansing at home at 3:30 p.m. next Sunday. 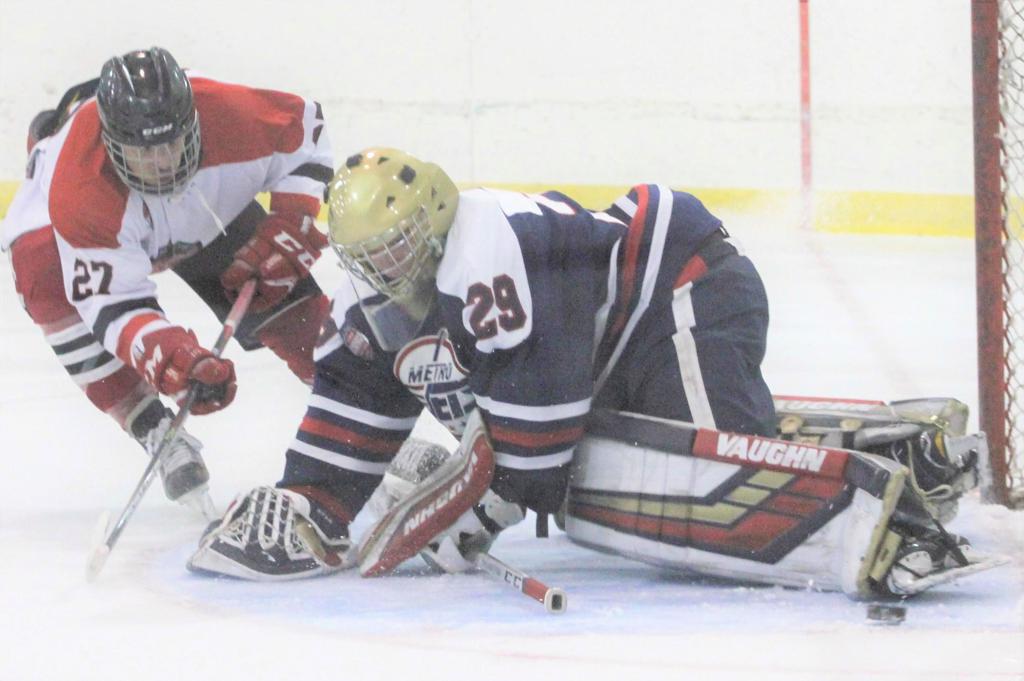